Electra was the second high-selling female of 2006. She crossed the auction block at the Oblong Valley Celebration Sale for $40,000 and was purchased by the syndicate of Diamond C, Entourage, Cybil Fisher and JCL Land and Cattle Company of Welch, OK.

She was undefeated as a senior three-year-old in 2006 and also earned the title of Reserve National Grand Champion. An image of Electra captured by photographer Cybil Fisher graced the cover of the November 2006 issue of the Jersey Journal.

She was then named Reserve Grand Champion of the competitive Royal Agricultural Winter Fair in 2008 and Grand Champion of both the Wisconsin Spring Spectacular Show and the New York Spring Carousel Show in 2009.

In 2010, she stood second in a competitive aged cow class at the Central National Jersey Show and was tapped as Grand Champion of the Kentucky State Fair. She also earned laurels as the All American Aged Cow at The All American Jersey Show.

This past year, she topped the 100,000M class at both the New York Spring Carousel and the International Jersey Show and was also tapped Reserve Grand Champion and Reserve Senior Champion, respectively.

Click here to see how "Electra" has developed over the years, as highlighted in our ad in the January 2014 issue of the Jersey Journal. 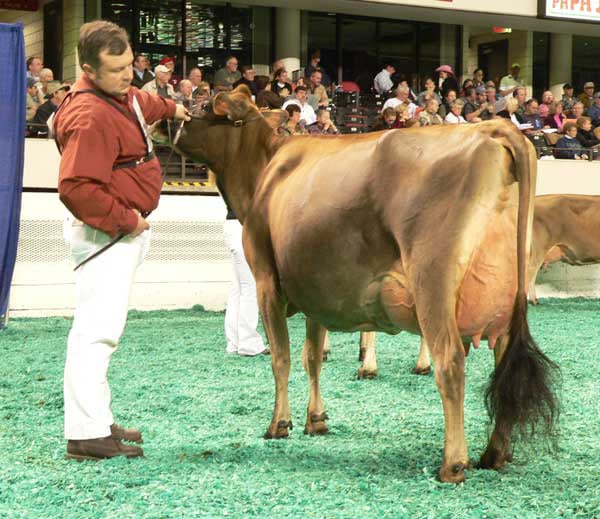 Electra from another angle.

Electra tops the class of senior three-year-olds at The All American Jersey Show in 2006.

In 2006, "Electra" graced the cover of the November Jersey Journal.